The history of the butcher’s shop on The Cross, probably starts in the late 1600s. The first confirmed date we have is 1718 with the butchers shop and slaughter house having been left in the will of one Thomas Hill to his son in law, indicating that the business was already established by that time. 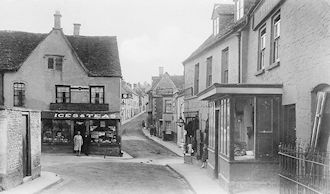 Over the next three centuries the premises were permanently occupied by various butchers until the Taylor /Robinson family bought them in 1921 from A. Buckley. Prior to that, in 1920 Leonard Taylor moved from Misley near Ipswich to Nailsworth with his family, where he rented a butcher shop in Market Street, which he also later bought. Leonard married Mary Robinson, who already had two sons (Stanley and Harold) from her previous husband Lewis Robinson, who had died at the age of 28. Leonard and Mary had a further 5 children of their own (Jack, Kenneth and three girls). Subsequently the business was run by Leonard, Harold, Jack and Ken, who had the two shops in Nailsworth and Minchinhampton and one slaughter house in Nailsworth. The slaughter house behind the shop in Minchinhampton (still standing with the original gullied floor) ceased slaughtering in the late 1920s when all slaughtering was moved to Nailsworth premises. Most of the meat for the two shops came from Nailsworth until 1960s. The company along with other local butchers also owned a share in Cotswold Wholesale Meat Co which had an abattoir in Ebley, near Stroud.

Leonard retired in 1957 and the business was continued by his 3 sons. In 1967 Harold’s son Hugh Robinson joined the business, followed a few years later by his brother Stephen Robinson. By this stage Jack and Ken’s children had decided to follow a different direction to butchery.

During the 1970s Harold and Jack retired, after which the Nailsworth shop was closed. Ken retired in 1979 and a year later Harold’s grandson Mark Robinson joined the shop in Minchinhampton. L. Taylor and Sons Ltd was then run by Hugh, Stephen and Mark until Hugh retired in 2006.

Currently Mark Robinson runs the business with Shaun Webb, coming in as a Director in 2013. Stephen retired in 2009 but still helps out on a part time basis, which is always much appreciated…

This website uses cookies to improve your experience. We'll assume you're ok with this, but you can opt-out if you wish.Accept Reject

This website uses cookies to improve your experience while you navigate through the website. Out of these, the cookies that are categorized as necessary are stored on your browser as they are essential for the working of basic functionalities of the website. We also use third-party cookies that help us analyze and understand how you use this website. These cookies will be stored in your browser only with your consent. You also have the option to opt-out of these cookies. But opting out of some of these cookies may affect your browsing experience.
Necessary Always Enabled
Necessary cookies are absolutely essential for the website to function properly. This category only includes cookies that ensures basic functionalities and security features of the website. These cookies do not store any personal information.
Non-necessary
Any cookies that may not be particularly necessary for the website to function and is used specifically to collect user personal data via analytics, ads, other embedded contents are termed as non-necessary cookies. It is mandatory to procure user consent prior to running these cookies on your website.
SAVE & ACCEPT